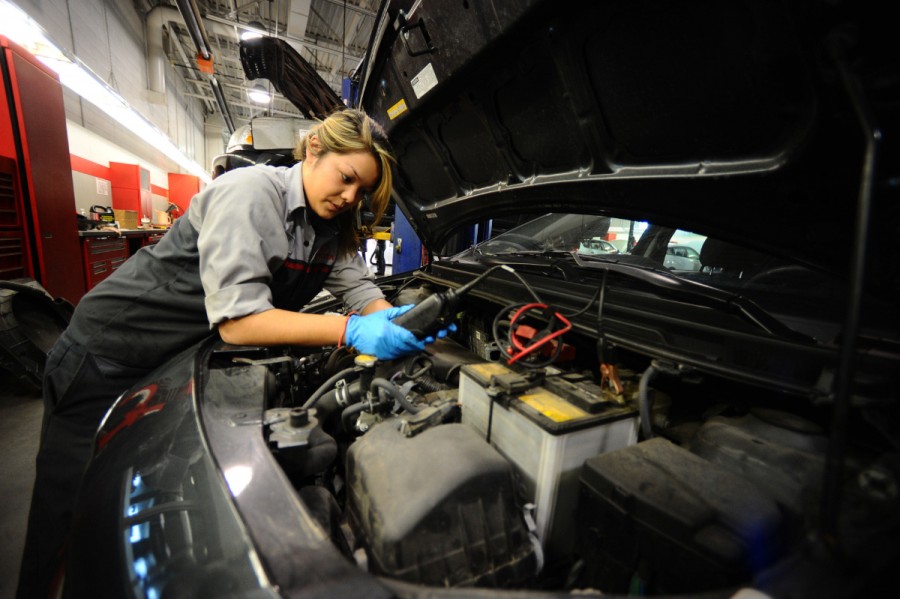 Let’s start with some facts. Of the roughly 130,000 people employed in the automotive industry, fewer than 15% are women. That figure drops to only 1.4% when narrowing this to the auto trades sector of the industry. On a broader scale, only 16% of women are employed in Science, Technology, Engineering and Mathematics (STEM) professions. Retention of females in the industry has also been a challenge in the past, however statistics on this are harder to calculate.

So why is this the case? There are no physical or mental attributes that disqualify or disadvantage women from performing as well as men in the field, but there are a many factors at play.

History, cultural norms, peer pressure, the stigma of it being a male-dominated industry, perceived hostile workplace environments, anecdotal stories of negative female experiences in the industry, parents reluctance to support daughters down the automotive trade career path, schooling institutions and methods that retain ‘traditional’ views about males and females and the types of subjects they should be focusing on, plus the lack of pathways and opportunities for high school aged girls to experience the automotive field are all combining into the current industry make-up.

Understanding these factors is one thing, change is something else. There is no magic bullet. The good news is progress continues to be made on a variety of fronts. One of the most critical aspects to change is education.  At the individual level, getting more young women exposed and involved in trade type skill activities from an earlier age allows them to test their interest in these types of fields in a positive, open environment, free from any stigma or prevailing understanding.

Non-profit organisation Dare To Be Different, setup by Susie Wolff, former racing driver and the CEO of the Motor Sports Association Rob Jones, is tackling the issue of exposing girls to this world head on, not just at the individual level, but also at a community and societal level as the program is a global initiative. 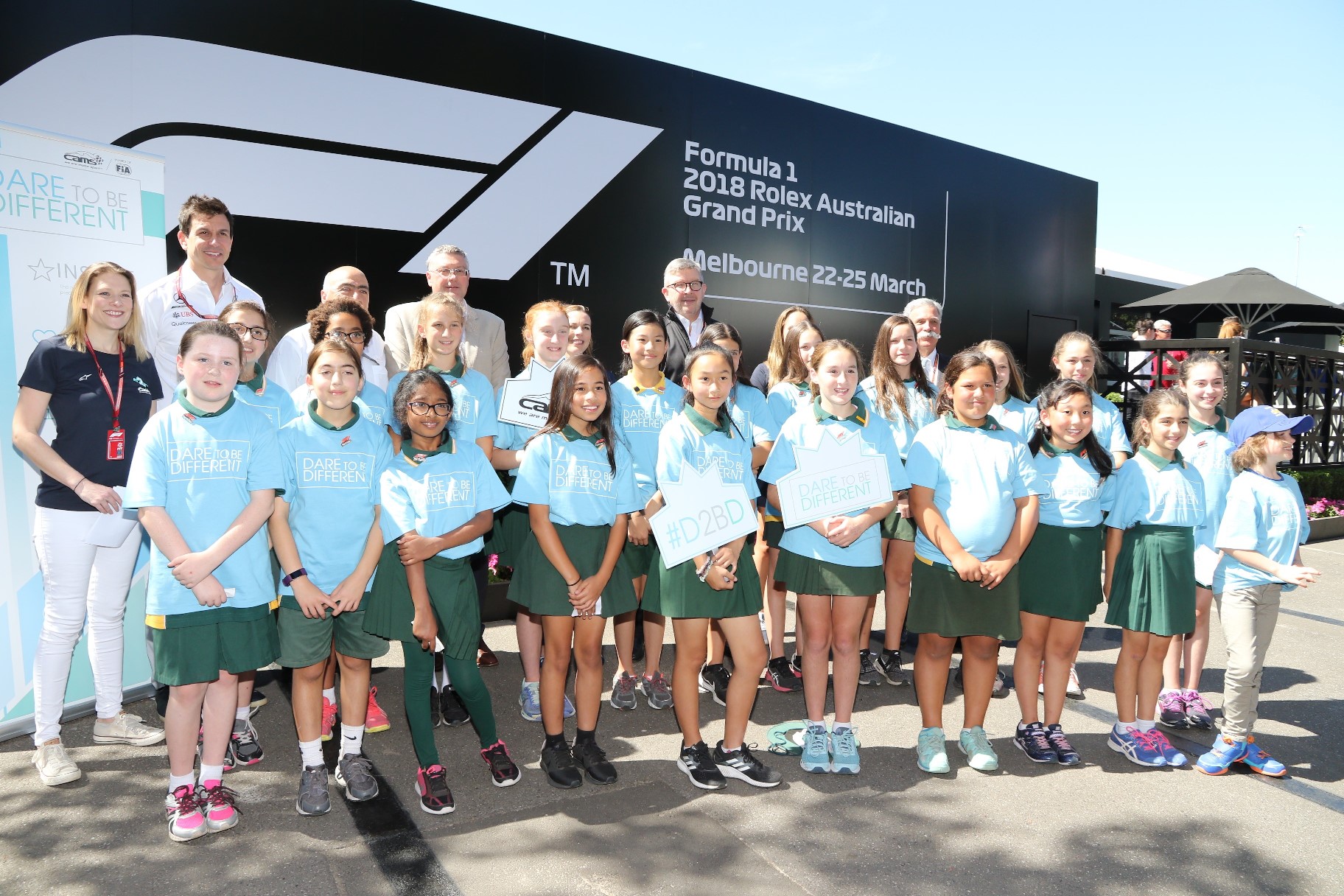 Dare To Be Different Events have been conducted in Australia, taking primary school and high school age girls and providing them with an opportunity to understand the opportunities in the motor racing and auto industries. They are exposed to and experience different areas of the industry first hand. For many girls, this is their first experience changing a wheel, driving a go kart, or taking on some STEM (Science, Technology, Engineering and Mathematics) activities.

Susie’s vision is to increase the participation of women in all forms of motor racing and automotive spheres and change the views of women in perceived male dominated industries.

There are also local groups leading the way, including the Women In Automotive Group (WinA) who provide a voice for women in the industry, hosting events in Victoria, giving members opportunities to upskill, network and share their experience.

Hearing from women in the industry that are living these careers, plays an important role in inspiring both a step change in society and the industry, but also talking directly to girls and women who may be interested, by personalising the careers.  Evolve spoke to a number of women who were happy to share their experiences, challenges and ideas around how they feel more women can move into and have a rewarding career in the field. 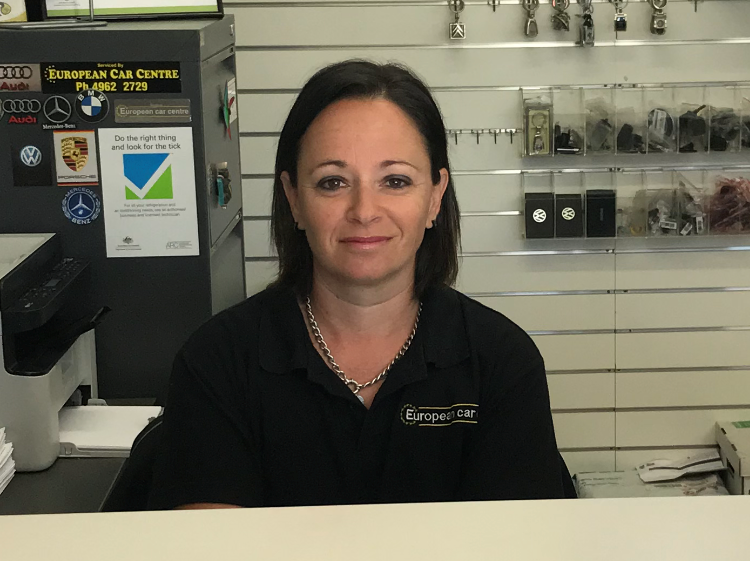 Part owner of the European Car Centre, Renee has been in the industry for around 20 years.

After picking up an interest in cars from an early age, a career in the industry made sense to Renee and her first role was as a Spare Parts Interpreter for a dealership, before a stint at a local mechanical workshop.

About 13 years ago she took on the part ownership position, forming European Car Centre, and day to day handles the business side the workshop including customer service, parts ordering and the finances.

Over her career, Renee looks back with positive memories about her experience in the industry and the way she has been accepted.

“Sometimes men want to speak to a male, but they are usually pleasantly surprised that I know what I am talking about. That scenario is rare though and I have never had any major issues.”

Renee feels that we all need to flip how the conversation takes place and rather focus on the negatives, focus on the opportunity and benefits of having females as owners, office workers and mechanics.

“A large percentage of customers booking services and repairs are female. However the reality is females are often intimidated about being taken advantage of by mechanics, so being a female in the industry, straight away they feel more comfortable and I know how to explain things in a simple way so they understand what is happening with their car.”

Renee knows of a few female part-owners in the Newcastle region, however recognises there is still a vast underrepresentation of women in mechanic roles.

“I’m positive about the future though and know with time, more females will take up careers in the industry, with a positive result for everyone,” 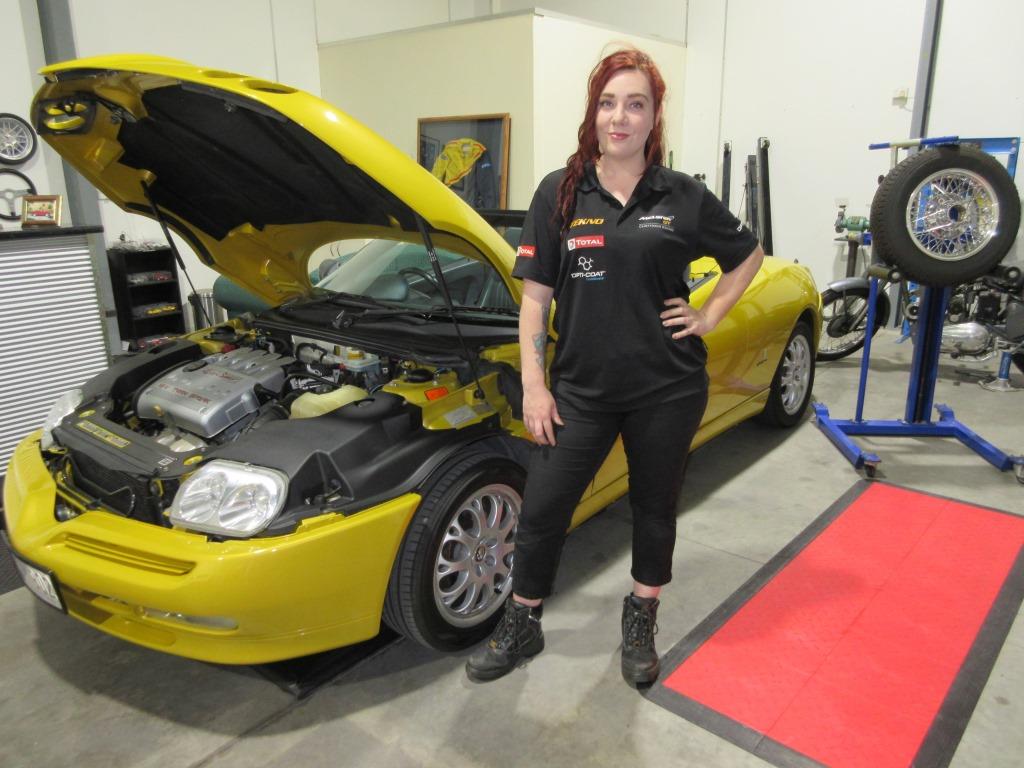 Casey was studying psychological science and criminology at University, however when personal circumstances changed she had to re-consider her future, deciding to pick up some extra work at her step-father’s mechanical workshop.

“To my surprise, I was enjoying what I was doing. It was hands on, but it engaged my brain and was rewarding to learn, so I dropped out of university and officially signed up for an apprenticeship.”

Despite being the only female mechanic she knows, or knows of, her experience has been overwhelmingly positive, with only a few occasions where she felt disrespected.

“Most people are just simply surprised when I tell them I’m a mechanic. I have to correct the occasional person that assumes I am the secretary, and a couple of men have wanted to speak to a man about the status of their car’s faults or repairs, but I don’t get disheartened because it is a small minority.”

Casey is looking forward to becoming fully qualified and being respected on her own merits.

“I want customers to choose me for their car repairs, not because I am female, but because of the quality of work I provide.”

Casey feels her own experience is a great example of where early exposure could be a key to unlocking more females into these types of roles.

“I thought I wasn’t cut out, that it wasn’t possible if you weren’t a ‘car person’ or hadn’t been around cars your whole life. Looking back these were the preconceptions that perhaps other women are holding on to.”

“I’d never even considered becoming a mechanic as I sat in the lecture halls at university. It was only the fact that I was given the opportunity to sample being a mechanic that the door opened. If I could have had the chance to try out mechanical activities at an earlier age, at school, I’m sure I would have pursued this career path years ago.”

“The fact that many young girls are still not given these opportunities means we are leaving stones unturned. I am sure there are other women out there that would be fantastic mechanics and enjoy the career, but social norms and the lack of mechanical trade exposure has led them down other career paths.” 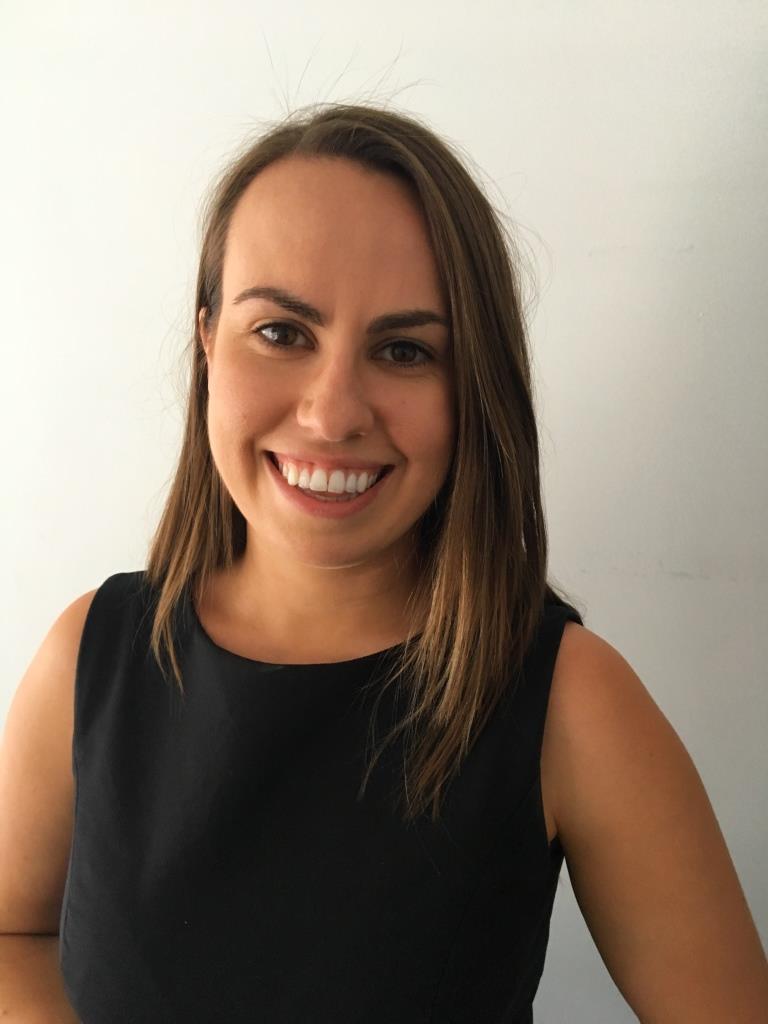 Growing up around cars and with family friends owning a Mercedes dealership, Olivia naturally gravitated to a potential career in the industry.

Olivia has been working as the Service Manager for seven months so has a fresh outlook as a female only recently entering the industry.

“Having a supportive team has made all the difference. Where I am still learning in regards to mechanical knowledge and terminology, the mechanics are really good at explaining things and helping my education.

“Generally everyone is very good and overall customers don’t have issues dealing with me or taking the advice and information I am giving them; it is only the odd occasion that an older generation man wants to talk to a man/mechanic.”

Although overall the industry is very male-dominated, there is still a significant percentage of administration, office and financial workers who are female. For Olivia, it is a family affair, with Olivia’s mum handling the accounts side of the business.

“I’d absolutely recommend it to other females. It’s not rocket science. The more females that get involved, the further barriers will be eroded.”

"I'm thinking about doing an apprenticeship myself!" 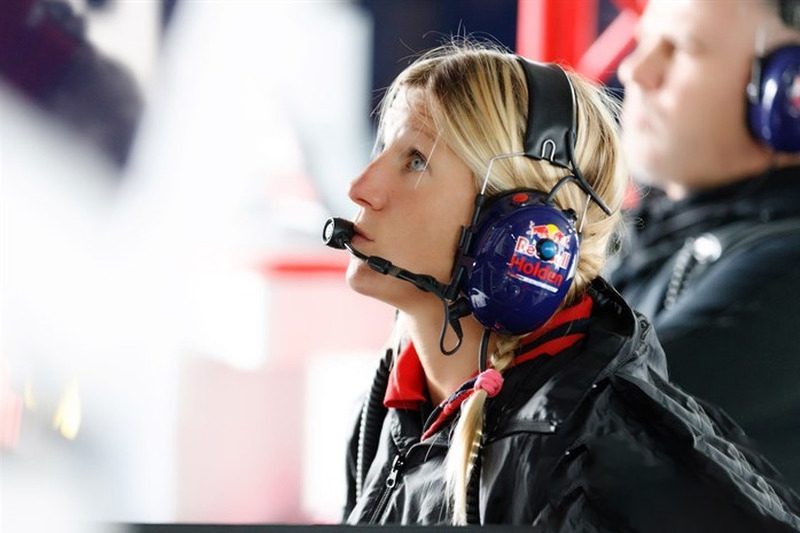 Motorsport, just like the automotive service industry, is also a male-dominated arena, however there are always examples of women that have forged careers in the sport, whether it be in management, like Claire Williams, Deputy Team Principal at the Williams Formula 1 team, Simona De Silvestro, Supercars driver with Nissan Motorsport, or on the engineering side, like Romy Mayer, Data Engineer for Red Bull Holden Racing Team and Jamie Whincup’s Championship winning Supercar.

Romy gained an interest in engineering at a young age via her father who was involved in the industry and the fact their home town Stuttgart was home to many car manufacturers.

After completing an internship at Mercedes, Romy confirmed her interest in car design. She studied Automotive Engineering at University and through the university’s motorsport program, was hooked. With hard work and experience, Romy now proudly holds what is an important role within the multiple Championship winning team.

Romy also aims to inspire other females to pursue a career in engineering, speaking at functions and universities regarding her experiences regularly and is encouraged by the response she receives from students and those in the wider industry.

“The hard work and study of engineering wasn’t the issue for me, it was more the fact I felt I had to prove my worth. Young women shouldn’t have to prove they’re on par with men, they already are!”

“Fortunately things are changing and there are more programs encouraging women to get involved. It’s a rewarding career and I hope more females follow this path if they are interested in pursuing it,” said Romy.

Let’s not delude ourselves, this is an industry challenge that will remain for quite some time, but as society slowly shifts, combined with the correct mix of tweaks to the education system, government and private initiatives, female leader’s in the industry and more successful stories of female’s who are finding fulfilling career’s in the automotive trade are all aspects that if combined  will further break down barriers and show meaningful changes on the number of women in the industry.